BOUNDARY ELEMENT FORMULATION OF PARTICLE FLOW IN A MICROCHANNEL

Boundary element method (or Boundary integral method) is a numerical tool that is well applied to many linear problems in engineering. There are several advantages of the boundary element method (BEM) over other numerical methods (such as Finite element method - FEM) and some advantages are: (i) discretization and modeling of only the boundary of the solution domain, (ii) improved solutions in stress concentration problems, (iii) accuracy of the solution regarding that it is a semi-analytical method (the integral equation is obtained using exact solution of the corresponding linear problem, the numerical approach is necessary only for evaluating the resulting integrals), and (iv) the possibility of application to domains that extend to infinity in one or more dimensions. Especially, for problems that involve successive remeshing, the boundary-only nature of the BEM presents a valuable property – since there is no domain discretization, remeshing is not an important issue. Also, the continuity and compatibility conditions within the solution domain are satisfied in an exact manner in the BEM (in the FEM, on the contrary, the continuity and compatibility conditions across the elements are satisfied in a numerical manner).

Considering fluid flow in microchannels, typical flow speed is low (resulting in very low Reynolds number) and the inertia forces are negligible (in magnitude) when compared with the pressure or the viscous forces, the flow can be considered as the so-called creeping flow. The governing equation of the creeping flow is the Stoke’s flow, which is a linear partial differential equation suitable for BEM. Considering the electrokinetic phenomena which occurs in many microfluidics-based devices, such as electro-osmotic pumping, electrophoresis and dielectrophoresis, the governing equation is the Laplace’s equation which is in many cases also a linear partial differential equation. On top of the fluid flow and electrokinetic phenomena occurring in microfluidics flow of particles within a microchannel is also very common in many microfluidics applications. A rigorous simulation of the particle motion requires massive remeshing when finite difference, finite element and finite volume based numerical techniques are considered. Considering the linearity of the governing equations and the necessity for remeshing, BEM is a good choice to simulate particle motion inside a microchannel under the action of hydrodynamic and electrokinetic effects. In this project, a BEM code will be developed to simulate particle trajectories under the action of hydrodynamic and electrokinetic forces. Spherical, cylindrical and elliptical particles will be used to resemble the motion of bioparticles such as cells and bacteria. Both deformable and non-deformable particles will be considered. Parallel computing will also be utilized to extend the capability of the model for the simulation of many particles. 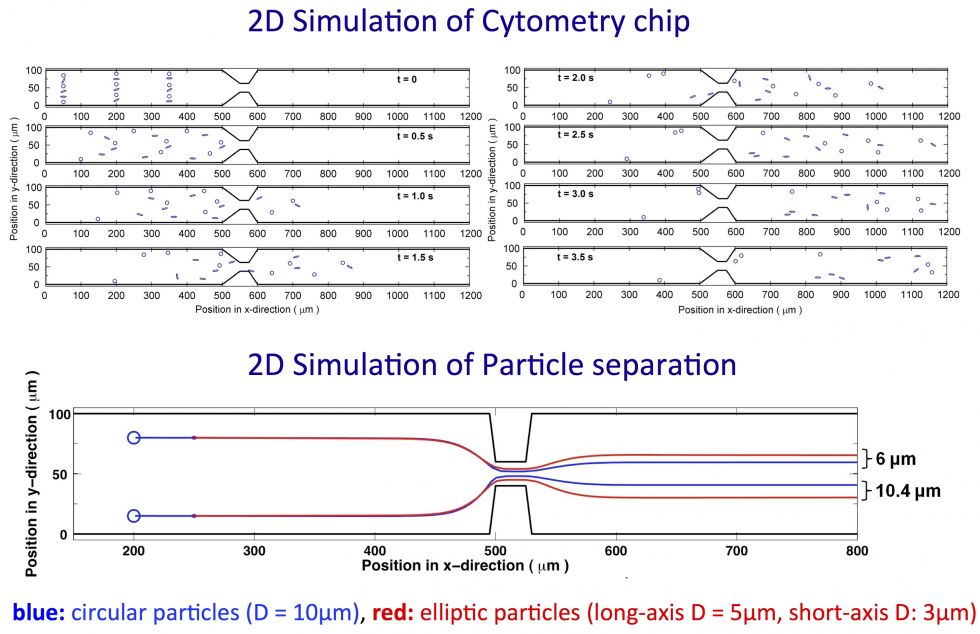